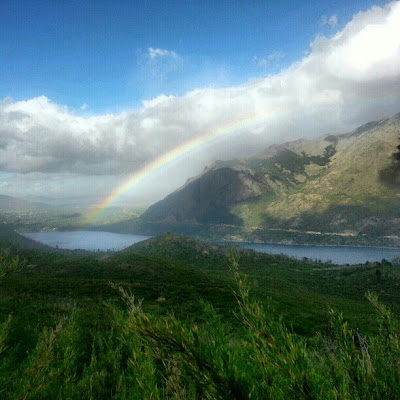 Bariloche is part of the Parque Nacional Nahuel Huapi and I read climbers go there to try easier routes than what you find around Fitz Roy. In the end it rained so climbing was not going to be possible for me, but I didn't care, I needed to go out and see things for myself. I could at the very least appreciate the type of rock that was there and get familiar with the place. It fucking poured on me, but I was determined to have fun. I had enough gear to help escape the rain. I decided I'd try to rail run as much as I could. I didn't know how far I'd get. 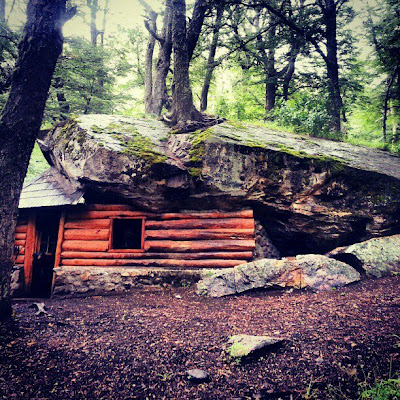 There was gusty winds that day so they had closed out the chair lifts that get you to the top to make the trekking easier. I had to take the long route, through via Arroyo Van Titter, 12 km each way, to Refugio Frey at 1700 meters high. I ended up trail running most of the route, but walked most of the last ascent part which is pretty steep. It was a total of 24 km and it took me about 6 hours total. The above cabin looking thing was built under a huge boulder, its a Refugio, Refugio Piedritas, owned by the local Club Andino Esloveno. It only fits about eight people, but you can camp around it in the forest. 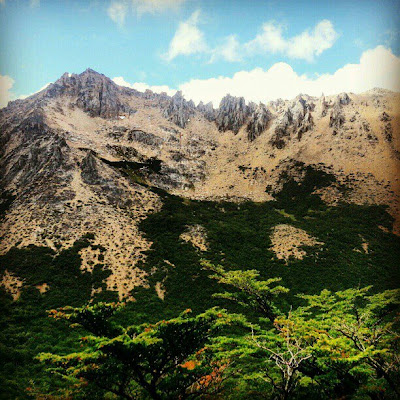 This was the first glance of real looking rock things. It didn't look climbable but it did look amazing. At times the rain would stop and I'd take off my Gortex Shell jacket but I quickly realized that even though I had a good jacket to protect me from the water nothing was preventing all that sweat from accumulating from my running and I ended up being just as soaked as if I wouldn't have been using my shell jacket. I hoped at least it'd prevent me from getting sick somehow, I wasn't sure. If you have any recommendations for trail running in the rain please let me know. The only thing I can think of is bringing multiple shirts to keep changing. I brought two but both got seriously soaked, even with the Gortex shell on. 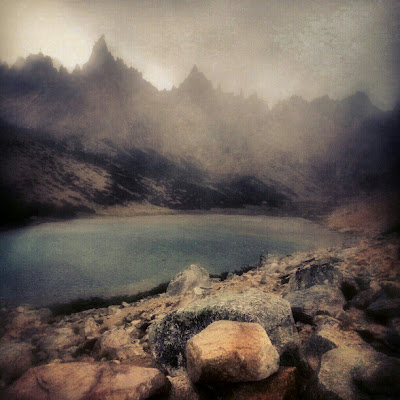 At the top by Refugio Frey around Laguna Toncheck I started feeling hail, and the winds were insane, it was seriously nasty conditions, I'm lucky to have been able to at least get one picture without fucking up my camera. The trail is easy to follow and even though it was raining there was still quite a bit of folks on the trails, but what surprised me was seeing a lot of folks without any serious gear on. I saw families with just t-shirts on, and at one point I saw a mother carrying her child on her shoulders. I thought I was getting a work out... This view was promising but the conditions really didn't allow me to get any further. Just by looking at this I can imagine there is great climbing nearby. The place to go seems to have been near Cerro Catedral. Back in the city in Bariloche rock climbing isn't something that you can expect anyone to care over. Contrary to Puerto Natales there are many tourist agencies there that had listed many activities and a few did mention rock climbing but when I inquired about it it seemed there were really only a few local guides and it didn't seem that people took it that seriously. I remember one lady having to take her glasses of to look to me to see if I was serious when I asked her about the rock climbing guide options there as she had them listed as options. The area near Cerro Catedral seemed promising but I couldn't find any climbing books / topos. I'll rule this area out for future trips.