Every now and then I'm asked how much activity goes on in mac80211 development on the Linux kernel. Today I decided to make a graph about contributions and break them down by the major organizations contributing from v2.6.27 up to v3.5-rc7. 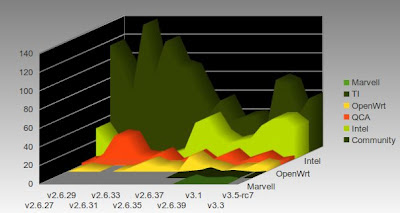 And now the short analysis: Intel started doing most of the development, later on Atheros (now known as Qualcomm Atheros or QCA) picked up some serious development. Intel later hired Johannes Berg and well that obviously accounts for Intel's huge spike in contributions and the decline in the community's contributions ;) What's nice towards the end is the increase from other organizations like TI and Marvell. The community also always manages to find its new contributors and always leads the development effort even with most 802.11 hackers already being hired at most corporations.

If you want to run your own stats download the mac80211-stats script, and you'll need Chris Mason's gitstat. I just can't wait until Google Fusion Tables lets me dynamically import data and generate nice graphs like these dynamically, for now I had to use Open Office for this pretty graph.